Hey guys! I am very psyched to announce that I'll be participating in Free Comic Book Day this year! I will be at Heroes World here in Katy, TX, on Saturtday, May 5th - signing comics and doing some free sketches! In fact, look at what arrived today courtesy of Archie Comics! 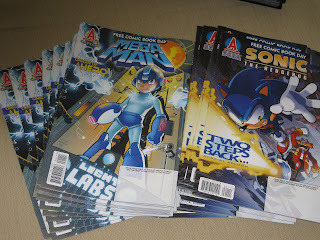 Not sure what hours yet, but will keep my Twitter updated. If you're in the Houston, TX, area be sure to come out, say hi, and get some comics! 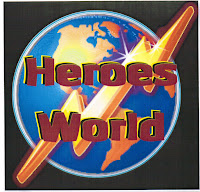 Posted by Matt Herms at 2:08 PM No comments:

Hey gang! Here are some books I've worked on that'll be dropping in July! All from Archie Comics. Hope you check 'em out!! 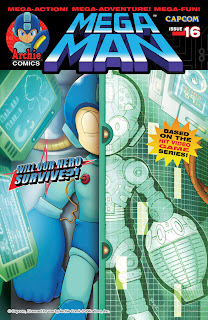 MEGA MAN #16
"Spiritus ex Machina" – the epic conclusion! The debate over the future of robotics reaches an explosive turning point, and with multiple lives hanging in the balance, the Robot Masters race against time to save their creators. Will one make the ultimate sacrifice to save their comrades? And will Dr. Lalinde’s tragic secret finally be revealed? Meanwhile, Dr. Wily welcomes the newest robot to his army - who is Break Man? 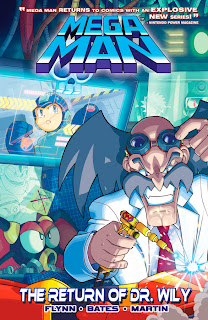 MEGA MAN 3: THE RETURN OF DR. WILY (TP)
The hit new MEGA MAN series from Archie Comics continues! Mega Man is about to retire his Mega Buster forever – with Dr. Wily’s schemes defeated, our young hero thinks it’s safe to return to his life as a helper robot. Wrong! Dr. Wily returns with a vengeance, striking back with eight all-new Robot Masters! It’s up to Mega Man to take on the malicious Quick Man and his seven sinister robot brothers, foil Dr. Wily’s insidious schemes, and storm the mad machinist’s castle in a scale so epic you’ll have to see it to believe it! MEGA MAN VOL. 3 collects MEGA MAN #9-12! 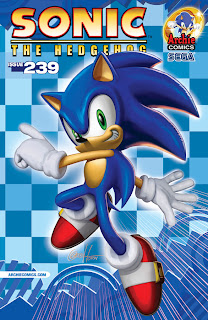 SONIC THE HEDGEHOG #239
"Heroes" Part One: It's TEAM FREEDOM vs. TEAM METAL!" Elias Acorn may no longer be king, but he's still a symbol of hope in Dr. Eggman's eyes – and that just won't do! As Dr. Eggman launches a two-pronged assault, Sonic and Team Fighters must save Elias from a deadly assassin – his own sister! Featuring a brand new painted cover by Greg Horn! 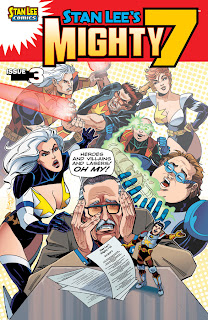 STAN LEE'S MIGHTY 7 #3
"A Monster Among Us!" – Stan Lee Comics'"MIGHTY 7" continues! HEROES and VILLAINS and LASERS! OH MY! The all-new superhero property from the co-creator of Spider-Man, the X-Men and more, takes a dramatic turn as a frightening new villain finally makes his destructive debut! As our heroes continue to adjust to their new lives on Earth, Stan must adjust to playing host to the unruly band of aliens! Can the greatest comic book creator ever manage to spare the city of L.A from complete chaos?!

Look Back: Sonic the Hedgehog 227

Hey guys! Since we missed last month, here's a second dose of colorist's retrospective this month with Sonic the Hedgehog #227, the second part of the "Genesis" story arc. This ish spotlights the last few levels of the original Sonic 1 game, and this sequence in the Labyrinth Zone is one of my favorites!

Water effects! How cool are those?? Separating all those bubbles was a pain-in-the-butt... But well worth it, I think. This was also the first ish I worked on after downloading this awesome flatting software, which is a totally must-have for colorists! It has definitely cut down on work time for me!

Speaking of flats, I went with some pretty flat colors underwater - an effect that I would refine more in some later issue of Mega Man.

These were some of the earliest pages I remember seeing in "layout" form when we were gearing up for "Genesis." Truth be told, Patrick's layouts were incredibly detailed - they looked practically like finished pencils! Definitely pick up the "Genesis" hardcover, on sale now - I hear that there are a few "process" extras that show the pages through layouts, pencils, inks/letters and colors!
Posted by Matt Herms at 4:55 PM No comments:

Check out a peek of this month's Sonic the Hedgehog, from Archie Comics! I'm very proud of this one - kinda' a breather issue without as much non-stop action, which means lotsa' quiet moments in a whole buncha' different environments and color palettes! Make sure not to miss this one!

SONIC THE HEDGEHOG #235
"Remember the Fallen." The Freedom Fighters are torn apart in the fallout from last issue. Sonic and his friends must deal with the loss in their own way, and it will change the team forever. When Silver the Hedgehog arrives looking for "the traitor," will the weary Sonic give him a chance to speak?
32 pages, $2.99.
Posted by Matt Herms at 11:14 AM No comments:

Hey guys! Just wanted to share a peek at this month's issue of Mega Man, from Archie Comics! Be sure to pick it up at your local comic shop or bookstore!

MEGA MAN #12
"The Return of Dr. Wily" Part Four: This is it – the grand finale of “THE RETURN OF DR. WILY"! Dr. Wily has hidden himself in his latest fortress and surrounded himself with killer robots as he plots his counter-attack. Can Mega Man breach the defenses and stop the mad scientist in time? Maybe not alone – but the Original Robot Masters have got his back! It’s all-out robot warfare in the explosive conclusion!
Script: Ian Flynn
Art: Ben Bates, Gary Martin, John Workman and Matt Herms
Cover: Patrick "SPAZ" Spaziante
Shipping Date: 3/28
On Sale at Comic Specialty Shops: 4/11
32-page, full color comic
$2.99 US
Posted by Matt Herms at 9:27 PM No comments:

So it's been in my "Currently Coloring" slideshow (over to the right) for the last month, but I am very proud to announce at last that I'll be joining the creative team responsible for the return of Archie Comics' superheroes: The New Crusaders, launching this May from Archie Comics and iVerse Media! I'll be coloring this new monthly series, released digitally, with story by Ian Flynn and art by Ben Bates. (Our fellow Mega Man creatives, the fantastically talented Gary Martin and John Workman, round out the creative team.)

Our editor Paul Kaminski recently did an interview with Comic Book Resources - including a first look at some interior shots! It's a very different book from the rest of the "Archie Advenutre Series," and I cannot wait for you guys to check it out in May. In the meanwhile, the Red Circle Comics official website has launched. Be sure to check it out!

And yep, I will still be providing the monthly colors for Sonic the Hedgehog and Mega Man, too. Lots of exciting stuff on the horizon!
Posted by Matt Herms at 11:41 AM No comments: Posted by Matt Herms at 7:04 AM No comments:

Yikes! March totally got away from me this year. (Being sick for half of it will do that, methinks.) So let's see if I can do some catching up here in April, huh?

I believe Mega Man 03 was the first ish to have a regular production cycle, at least for me. I usually receive pages to color for a book about a month to a month-point-five before the book is scheduled to go to the printers. As of this issue we also switched up the team again, adding the fantastically talented Gary Martin to the book as inker - a position he is kicking ass in to this day. 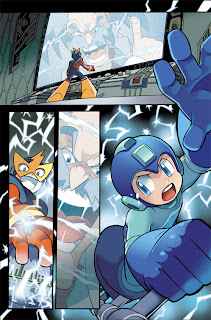 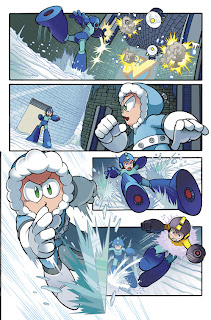 Gary's inking style is way bolder, stronger line definition than what I'm usually working with on the Sonic the Hedgehog books... I think I spent half the first year of this book just learning to color for different inkers!
This issue in particular featured some of my favorite Robot Masters - Elec Man, in particular. I am so excited that Elec Man has been a prominent supporting cast member in the books - a leader of sorts to his fellow RM's. He's got a great color scheme and his powers are the most fun to render. The opening pages to this book in particular were a blast. Nice blacked out backdrops with all the lightning I could go nuts on!
I am a little surprised we didn't have to edit that first panel a little, though. With where the word balloons fit on the page, it crops Wily's hand and we're not sure which finger it is that Wily is holding up. (Once you see it, you can't unsee it.) 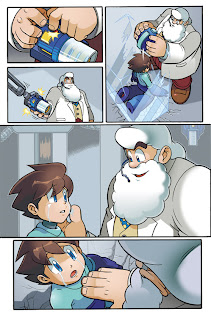 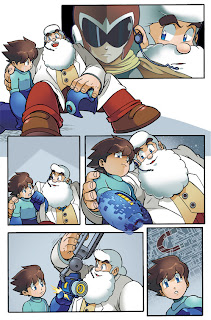 Hey look, Proto Man!
Dr. Light is a great character to color for. He's this fat, bearded, jolly machine-maker. A Jepetto (sp?) to Mega's Pinochio... Or a Santa Claus! I love giving him a shiny red Santa-nose. I thought for sure that wouldn't pass approvals but it has and it's stuck! (Though I try not to get too crazy with it, to be honest. Don't want the good doctor to look sick. Or drunk!)
I never did figure out how exactly to render the Magnet Beam power up. Thankfully it has (so far) only appeared in two issues of the book. I couldn't find any footage or screens of how it looked in Powered Up, either - so its colors are based purely on the look it had in the original 8-bit game. 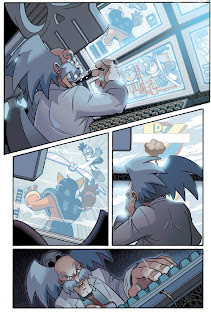 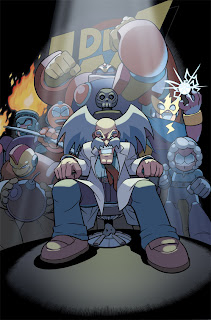 A couple more amazing villian shots of the evil Dr. Wily. When I receive the pages, one of the things I have to do is set up the final black-and-white artwork for colors and lettering. A page measures 6.92x10.5 inches (and I work at 600dpi), which includes the full bleed - art that extends slightly beyond the actual printed area. I was so excited when I was looking over the files and saw that last page, the original Robot Masters gathered around Wily. What a bad-ass, villainous shot! It's one of my faves in the whole first arc!
Posted by Matt Herms at 7:55 AM No comments:

Hey guys! Here are a couple books I'm coloring that'll be coming out in the month of June! 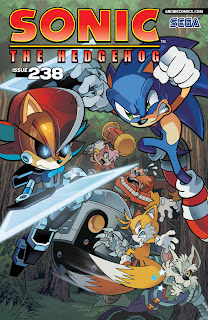 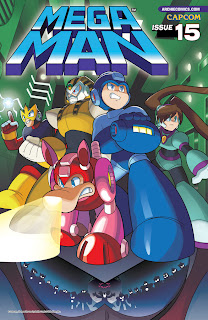